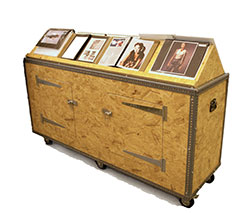 It may be almost sixty years old, but Dexion’s versatile Slotted Angle has never really gone out of fashion.

Used worldwide for the construction of benches, display cabinets, safety screens, access platforms, fire barriers and even more major structures, Slotted Angle has now been used to help showcase Britain’s fashion stars of the future at Graduate Fashion Week which was held at London’s Earl’s Court in June, 2010.

Dexion provided Sussex based Northbrook College with its Slotted Angle to enable them to build an innovative display stand that not only enabled students to transport their literature, but also allowed them to use the mobile stand as part of their exhibit.  The Northbrook College catwalk show was a great success and in particular proved a launch pad for Rhea Fields who won the ‘Best Womenswear’ award for her ‘About A Boy’ collection.

This concept was also taken up by a number of other colleges who decided Slotted Angle made an ideal platform on which to show their work.Dexion Slotted Angle was also used by Birmingham City University’s Fashion, Textiles and Three Dimensional Design students to display their work.  The Students used Slotted Angle to build a frame from which they hung their designs.

Graduate Fashion Week is the largest event of its type in the world. Staged annually for the last 19 years, it represents the work of more than 1,000 students from more than 35 universities and fashion colleges.   It provides students with an ideal environment in which to showcase their work to industry headhunters and to promote the colleges to potential students.

Dexion Slotted Angle is quickly and easily cut to size and bolted together to form frameworks, which can be readily modified or completely dismantled, and the components re-used. Strong enough to last a lifetime and infinitely re-usable, the slot pattern means that all four sizes of slotted angle can be used together in an installation with the slots designed to give the greatest flexibility for nut and bolt positions.